The genetic algorithm is a search heuristic inspired by Darwin’s theory of evolution. This algorithm borrows the following concepts from natural selection:

Only the fittest will survive - Charles Darwin

Before diving deeper, let’s first understand what genetic algorithms are trying to solve. 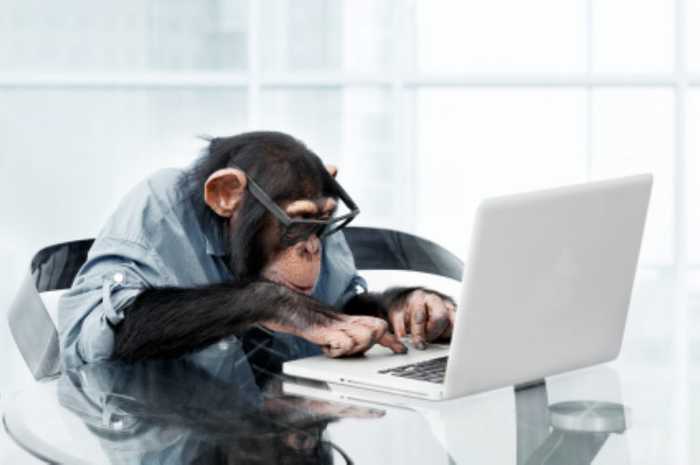 The infinite monkey theorem pictures a monkey hitting keys at random on a typewriter.

It suggests that if the monkey hits on the keyboard for an infinite amount of time, it will be able to type any given text. Yes, even the works of William Shakespeare.

Although, the probability of doing so is extremely low.

Imagine that the monkey has a primitive keyboard with only 27 characters. These are the small letters a to z and the space character.

The monkey’s task is to write the phrase: if music be the food of love play on.

How likely will the monkey write this phrase?

In other words, the probability of the monkey typing this phrase in random is:

And even if the monkey were able to write one million phrases per second, to be able to write this phrase randomly at least once, it would take this much time:

Nobody has this kind of time. So, how can we improve this?

The Power of Genetic Algorithms

We’ll discuss these two ideas more shortly, but for now, keep them in mind. Genetic algorithms make use of these ideas in 6 different steps:

Let’s discuss them one by one.

Genetic algorithms begin by defining a set of individuals called a population. Each of these individuals is a potential solution to the problem you want to solve.

Each individual is defined by a set of parameters called genes. These genes are joined together to define an individual’s chromosome. It’s the individuals’ chromosomes that define our solution.

But what should these parameters be?

It depends on the problem, but generally, the set of genes comes from a pre-defined alphabet. Usually, this alphabet is the binary alphabet: each gene can have a value of 1 or 0 (chosen at random).

In our case, we want each of our individual (solution) to be a guess of the phrase: if music be the food of love play on. To create solutions for this, we need a much more sophisticated alphabet than 1s and 0s.

For example, if we were trying to solve for the word apple, our solutions would look like the following:

These are all randomized strings that are 5 characters long. As you can see, the solutions can range from being completely off the mark to being close to the target. There’s even a possibility to get the solution on the first try!

But how can we tell how good (fit) each solution is? That’s what the fitness function is for.

Individuals with a higher score are more likely to be chosen at random for the next generation of individuals. By selecting individuals close to our solution, we can ignore all the other solutions that are off the mark.

You can define the fitness function any and which way that you want. That’s what makes it powerful. It can be flexible enough to accommodate any problem.

In our case, we can define it as “the number of matching characters in our individual and the target phrase.” So for example, if we were trying to guess the phrase apple, these individuals will be scored as follows:

Since the second and third solutions are closer to our target, we want to prioritize those two over the first solution.

The selection phase lets us select the fittest individuals and allow them to pass their genes to the next generation. The individuals chosen in this phase are called the parents.

There are many ways to select the parents. One of the most common ways is called Roulette Wheel Selection or Fitness Proportionate Selection. As the name suggests, the probability of choosing an individual is proportionate to its fitness score.

Crossover is the workhorse of genetic algorithms. It allows the parents (chosen from the selection phase) to exchange their genes.

The idea is that if we exchange the genes of two fit solutions, we’ll arrive at a solution that’s fitter.

Like selection, there are many different ways we can perform crossover. The simplest is Single Point Crossover. For each pair of parents we chose during selection, we create new individuals (offspring) by:

These offspring are then added to the new population.

When we create our initial population, we also define the genes that are present in the population. During crossover, these genes are exchanged amongst each individual to arrive at our solution.

But what if we never get genes that are required for the solution? Going back to the apple example, what if our individuals, never randomly generate the letter a? Crossover only exchanges existing genes. Even if we perform crossover till the end of time, we will never find our solution.

To resolve this, we perform mutation. Mutation is as the name suggest. We subject a gene to mutate (in our case, to a different random letter) with a low random probability.

This allows us to maintain diversity in our population and ensure that we arrive at a solution.

The algorithm repeats the loop until the population has either:

Once the algorithm stops, we can say that the final set of individuals is the solution to our problem.

Let’s see how we can apply what we learned to solve the infinite monkey theorem. As a refresher, we are trying to solve for the phrase if music be the food of love play on.

This phrase has 36 characters, so each individual will have a chromosome with 36 genes. Each gene will start with a randomized lowercase letter (or space). A chromosome represents a potential solution of the phrase.

The aim of our genetic algorithm is to maximize the fitness function. So, individuals with higher fitnesses are selected over individuals with low fitnesses. At the end, we expect our population to have an individual with the perfect score of 36.

By doing this, we can achieve the following result:

Here are some few comments about it:

In the next part of this series, we’ll walk step by step on how to code this. For the curious, here’s where you can find the final result and the source code.

Note: since genetic algorithms are relatively resource intensive, the demo might be slow on mobile.

Genetic algorithms are algorithms inspired by Darwin’s theory of evolution. In a nutshell, it uses:

Through these, best solutions are kept and bad solutions are removed quickly. This allows us to arrive at the ideal solution for a search problem relatively ease.

Genetic algorithms are a prime example of how much we can learn from nature. I hope that through this article (and the rest that will come from this series), you will find a new appreciation for how sophisticated and beautiful our natural world is.

See you around next time!